I am still recovering from three weeks touring around the United Kingdom/Wales area.  The tour I joined, for the third year in a row, was with Celtic Quilt Tours LLC. This was started by two ambitious women who know how to travel.

Our tour hosts, Debbi and Kim, recommend that we all meet in Manchester a day or two prior to the tour. I also recommend this as you have a chance to get acclimated to the time change. For me living in Southern California, it is an eight-hour time adjustment.  I left my area and landed in Newark with a small layover. My last leg of the flight took me to Manchester, Terminal 2. Now there is a lot of construction going on and three of my tour-mates were landing in Terminal 3. It was a hike to meet up with them and to top it off, their flight was an  hour late. But, all is good. We grabbed a cab and headed into our hotel. We were told that our cab driver was “Driver of the Year” and it was a ride!

After a quick-lunch and small unpacking, I headed out to just get some fresh air and take a peek at the surrounding area.  Piccadilly Square was alive with kids playing in the fountains, people just enjoying the sunshine and the usual hustle and bustle of a major city.

Manchester is building numerous high rises throughout the city. However, there are some stunning older buildings throughout. Manchester currently have displays of over 130 large plexiglass bees that have been decorated along with over

130 smaller ones inside various stores. 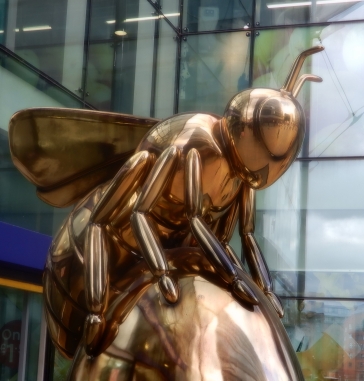 These are the two that we found near the Piccadilly train station.

After a 12 hour sleep, another tour-mate and I took off for Liverpool.  I was so excited as we walked down to the station, got on board (very clean train) and zipped on down to the beginning of the Beatles.  This has been a dream of mine for decades.

We decided to do the hop on-hop off bus which was 8 pounds each. When we came to the Beatle Museum, we hopped off. Now Liverpool is quite active, friendly with terrific helpful people. I believe we spent over 2 hours wandering through the Beatle Museum.  I was in Beatle heaven – reliving so many memories of my youth.

A quick-lunch at Good Eats which was near the Mersey. Wonderful staff as my tour-mate has food allergies. What she had ordered was pre-baked in butter which she could not have. The manager came over so she could change her order. In my book, that is great service.

Then we hiked up to the Cavern –

-again a major bucket list item crossed off.  I now know what Elvis fans feel like when they go to Graceland.  It was totally free to enter and there is only a fee later in the evening.  They had two performers on and it was Fab, Gear, Groovy and every other slang from the 60’s. 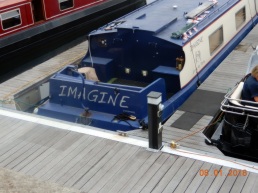 This looks like it would be a fun place to live.

We caught the late afternoon train back to Manchester and met up with the rest of the tour.  We know to meet in the bar around 5 p.m. just to see who has arrived, meet new friends and also catch up with past friends from past tours.

You know a tour is good when 80% of the people on the tour are returnees.   At that time, we are given a “Bags Out by ” time and when to meet our fabulous tour driver. Tony and our tour guide, Judy, were in charge of wrangling over 40 pieces of large luggage. We are responsible for our carry-ons and personal bags.  So after two days in Manchester, we were off down the road to Cardiff.

Leaving the bustling city was bittersweet – some of us didn’t get a chance to visit parts of the city due to other plans or arriving late on the day prior to leaving Manchester. But the bus ride over to Cardiff was filled with wonderful information from our tour guide.

I highly recommend a tour like this. It is all planned out with rest stops,  coffee refills, snacks and leg stretches.  There are a lot of other photos but will add them later.